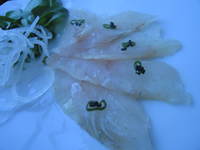 I was actually quite delighted to ascend upon this urban mecca until the full realization of Clark-Lewis in five hours hit me like a box of hot rocks in a sauna house once I looked Masu's menu. How in the heck does one order light here? It's not as if you can get good sushi boxed to go, especially if you're on the road... Maybe that's why drawstring pants were invented, no doubt in America. Batter up!

First on the plate was halibut carpaccio with truffle oil, something I'd dreamt about since first reading Masu's menu online. Dream on I have to say... I think this could become a masterful sashimi combination in the right hands, but frankly the halibut was too mild mannered to stand up to the swashbuckle of a truffle, Oregon or not. Maybe some uni could stand to duke it out with the flavors but my biggest beef was with the term carpaccio itself, something I see on a lot of future-forward menu's these days. Just today I had kobe beef carpaccio & beet carpaccio at the Columbia Tower Club but most dishes miss the point--the beauty of consuming a raw delicacy is in its paper-thin consistency, a sheaving of incandescent layers that melt on the palate. If that's not what the chef is going for, call it as it is... We'll probably still buy it, but won't be disappointed. 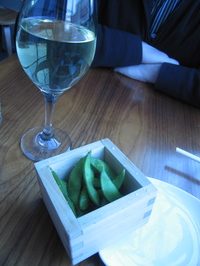 Moving on, we were presented with a sake box (Masu is the name for hinoki wood boxes traditionally used for measuring rice) filled with salted edamame & a zen-like miso that tasted of winter's kitchen. Deep, warming, & elemental, this was the simplest & most refreshing of our dishes, but not to be outdone by a spring-time awakening of mizuna, raw asparagus & sesame dressed salad garnished with crisp salmon skin. Move over bacon! 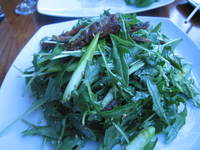 As you can plainly see, this was hardly turning into a "light lunch" healthy as it was but we plummeted headlong into the next course of specialty rolls (a.k.a. roll us on out the door to our next PDX dining destination!) Clearly we were in over our heads, ordering some of the richest sushi I've had by far & felt guilty for every bite we couldn't shove down our gullets. But once you read the menu descriptions, see if you could blame us??? 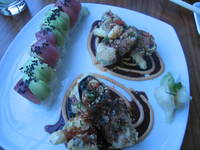 Take the "japanther": spicy crab, cuke, tuna, topped with avocado. The simplest of the bunch & most refreshing. Done deal. The "shroom'n" roll: tuna, roasted bell pepper, kaiware, avocado, asparagus, & cucumber topped with sauteed mushrooms & balsamic vinegarin a Dali-esque presentation. I just had to order this for the kitsch-value & offlandish name, & for the sheer fact that I've never seen anything like it. Unfortunately the mushrooms felt sugary & carmelized as their reduced balsamic counterpart, leaving little room for the other players in this roll to take bat. I almost wanted to scrape off some of the sauce as we watched our server leave to plug more quarters into her meter below on the street. The kaiware seemed sweet enough without such a sugary entourage.

THEN, "Death By Sushi" arrived, a final blow to the gut: unagi, avo, salmon, cream cheese, tempura fried crab over eel & fantasy sauce. Need I say more? This was the richest damn sushi anyone has ever dished up before my eyes & it had us doubled over until our lithe server (does she eat this stuff?) commended our efforts, took our remaining bites & didn't push hard for a dessert order. I think next time, I'll have to try their sashimi to get a real sense of Masu's fish mastery, but with a menu this inventive it's hard not to go the maki-zushi route... Learn from our example & save a pant-size--six pieces in Masu's language is more than a mouthful. With all this, why do you need to offer wifi? 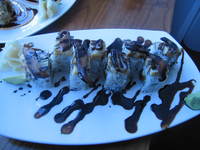 Dearest: Shave not sheave... otherwise your piece gave me heartburn... very stimulating palate though somewhat overly mixed.
So, we're curious... sushi aside, are there underground restaurants in Seattle? They're quite the thing in the SF Bay Area.
Several in Oakland have gotten some press... The BUS (an HTG bus with kitchen and service for maximum 20 - The Ghetto something or other in Rockridge and Digs down by the lake that was recently shut down after operating on random mondays for two years.
Famous chefs, home kitchens, living dining rumpus maybe outside porches for tables various salon atmospheres and word of mouth or Craigslist adverts... Many require that you be invited by someone who's known to the Maitre ou Maitressse...
We're looking for invites as I type...
As for "heavy" sushi... we think we'll pass... too much fusion and we get radioactive...
Love Ms. G