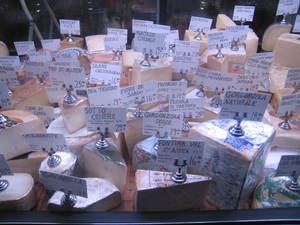 I am a cheesehead. No I'm not from Wisconsin, but as a teen from upstate N.Y., I did have a secret fantasy about entering the Miss Dairy America competition because I believed I could do great things with my passion for cheese... You know, extolling the virtues of curdled milk both as an essential part of our nutritional pyramid & as a life-enhancing elixir.

Even though it was many (many) years until I tasted my first Epoisses, I had a taste for the finer things in life mostly because I grew up in a town where artisanally produced cheese was a fact of life. Capiello, makers of the fresh mozzarella braids you'll find in many a deli case come from my home town, Schenectady. Freshly grated Romano was always passed at the table in my neighborhood (I always managed to acquire best friends & boyfriends with Italian families), not the bland Stella we find at QFC, but the pungent salty stuff, coarsely-grained & served with a silver spoon despite the distinctively "sheepy" taste. I'd love to come upon similar stuff in the West without paying for a gourmet over-priced, dried-out version. Buy it in a plastic bag & it usually tastes like a bad case of freezer burn. And the last straw was finding Poly-O ricotta (a drier style ricotta with lovely sweetness for cannoli's), the same cheese my family paid a pittance for at the Niskayuna coop, being sold at my local cheese counter for over $10 a lb just because they take it out of the tub & display it in a terracotta crock?

Step in, Steve's Cheese, Portland OR. Slogging through PDX blogs (check out the Pacific Northwest Cheese Project's site), I got a sense that this tidy new cheese counter might just be the way to get some of that old-world fix with a new-world mission--the search for the great American cheese. Upon calling Steve for directions, I was ectstatic amongst static cell-reception to be headed on course towards forty-or-so offerings, "the west coast's largest selection of American cheeses." I've been taunted by the N.Y. Times & Saveur who have taken to extolling the renaissance of farmstead cheese encroaching upon the shopping list of today's gourmand. The Euro is driving up the price of imported cheese with a vengance (I've witnessed at least a $5 per lb increase in all our cheeses from Spain over the last few months) so why not pay just a little extra for something as exotic as Blue from the Berkshires, Tomme from Oregon, or Hudson Valley Camembert?

Steve's smart little counter is set in the back of Square Deal Wines (a passionate venture also married to hand-picked selections with a story), as if destined to look out upon the vineyards of wooden crates that line this warehouse/gallery. Crammed into a cheese case half the size of DeLaurenti's at the Pike Place Market where some treasures leave me gasping for air at the price, Steve's Cheese is a blessing & an education in good politics. Oregon, so it seems, has it together when it comes to small purveyors (just ask Ethan Stowell, chef at Seattle's Union, as I did today) with far less taxes imposed, bountiful regional products, & more of an open-arms policy than our WA politicians.

Steve happily tasted us on whatever I pointed to, lining the various samples up on the countertop, & since he was ammenable to cutting without a minimum (another great perk) it allowed me to choose more than I intended to walk away with considering it was just the two of us with no fridge to house our purchases. I finally chose Friesago, made of sheep's milk from Minnesota, Upland Dairy Private Reserve, cow's milk from Wisconsin, Juniper Grove Gruyere, goat's milk from Oregon, & a stellar Winnemere--god bless Vermont cows! All of these magical little parcels were brought back to our room at McMenamin's Kennedy School in a maximum-enjoyment taste test with of course, some Oregon Pinot.

I look forward to Steve's website's launch & hope to order a ration of supplies via phone since I don't make it to Portland nearly enough. Is PDX the next Paris of the NW?

"A dinner which ends without cheese is like a beautiful woman with only one eye."
Jean-Anthelme Brillat-Savarin (1755-1826) 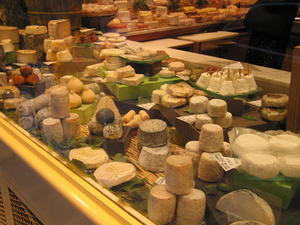 Your flavors and favors just keep expanding like the smell of truly soft-ripened cheeses, all runny and spreadable. Do keep on this way, let your language pull us into the sensualitease of "finger lickin' good" and "bon appetit" which double as discriptors of both bed and board.
Catherine, your beauty shines through these offerings with a tantalizing je ne sais quoi that will gradually attract the true gourmands of the world.
Keep up the fine work. Ms. G in Oakland

When you want success as badly as you wanted the air, then you will get it. That is the secret to success.

I just wanna thank you for sharing your information and your site or blog this is simple but nice article I have ever seen i like it i learn something today.