This is it. The picture that made me drive two hours & fifty-three minutes, 174.54 miles from home sweet home, to eat at Andina, Portland's only novoandean pit-stop--& now we have the great fortune to sample Emmanuel Piqueras Villaran's passionate fare at Mixtura in Kirkland of all places! While you can read into the soul of a chef in many ways, Emmanuel's genuinely heartfelt journey back to his homeland in Food & Wine made me a believer that this guy was for real with one-of-a-kind Peruvian food worth our own trekking. Can't wait try out his new venture, but every seat was booked this past weekend (presumably for early Valentine's diners like us) & it looks like for now, the place will be standing room only with gushing reviews like this from the Seattle Times.

So while Villaran has moved on to his own venture, a stop at his old stomping grounds was worth a thousand llamas, the kitchen now headed up by Coque Ossio of Lima who studied with Alain Passard of Michelin three-star fame. Not a bad catch for the City of Roses! The vast menu of Entradas (a.k.a. appetizers) hasn't seemed to change since Villaran's departure, so the legacy continues with an artful assortment of colorful plates with maximum flavor--all for five bucks a pop! I love Portland---the U.S. foodie capital of small plate offerings.

Thankfully Andina was flexible with our reservation as we needed time to digest our cheese & wine course in the hotel room & check out McMenamin's teeny-tiny Detention Bar down the hall since it closes at 10 pm on Sundays... When we waltzed in, there was a jazz ensemble in full swing & the place was packed with an eclectic clientele whose collective body heat gave the place a tropical warmth. Warning--do not wear wool or you will sweat like a sheep! With pushed up sleeves K. & I were ready to dig in, so we were put at ease by our server who seemed A.) genuinely knowledgable, B.) relaxed, but efficient, & C.) did a great job of not over-selling us, but patiently took our three rounds of ordering without a grunt or sigh. Now where are you going to find that in Seattle? I know you're not *supposed* to show your face on your blog, but there's a certain giddish glee in this shot that describes the menu at Andina better than words. 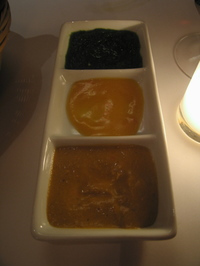 First off, you're served a progressively spicy series of sauces in which to dip your bread: the first features fresh Andean herbs which are grown by local farmers exclusively for the restaurant; the second features a sweet & sour blending of tropical fruit & aji amarillo, the Peruvian pepper that has a delightful burn; the third was a knockout of chilies & ground peanuts, like the savory sauce used in Papas a la Huancana. Such an intricate maze of flavors lay before us whetting our appetite for everything yet to come... I wish more restaurants would take notice & get more creative than garlic & herb-infused olive oil. On this trio alone, I was already hooked. Como maravilloso!

There's much to recommend , but the toast of the town was the Causa (a lime-infused pressed potato cake) called the Mixta Nikkei: 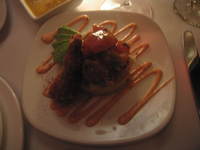 raw spicy tuna flavored with fresh lime juice, crab salad, & shrimp with crisp panko-like coating, fanned avocado slices plated up with a chile-infused aioli. Every element fell into perfect place & after we tasted it, we should have eaten a family-style portion--it was just that good. This was the first delight we ordered & we nearly did it again for our last bite.

So here's the rest (click each pic at the bottom of this entry for a ringside seat. It is a romatically lit restaurant afterall... ) From left to right: Papa a la Huacaina, Causa Morada, Wantan de Mariscos, Anticucho de Pulpo, Choros a la Chalaca, Conchas a la Parilla, Chicharron de Pollo

The picks: Anticucho de Pulpo, tender octopus skewered above caper-studded yucca; Choros a la Chalaca, meaty mussels served with a cold salsa that sang to Ken with its sweet corn simplicity; Papa a la Huacaina, chilled purple potatoes with a sauce so exotic, demure & creamy, it was hard not to dip your fingers onto the plate to retaste.

The pans: Causa Morada, too much of a good thing, the trout was piled mile-high leaving us smoked out; Wantans de Martiscos, call it what you will, they're still wontons; Chicarron de Pollo, quinoa-crusted chicken sounds good on paper, but over-fried (see picture); Conchas a la Parilla, our worst dish by far, tender scallops in a puckering sour sauce that was bitter to the end. Damn! That was the last dish we ordered, but dinner was so good overall, it hardly marred our memory.

Would I recommend this place for Valentine's Day? You betcha! And for you non-conformists, order the anticucho de corazon (beef heart skewers)--here's a place you can eat your *hrt* out!!!

Andina: A Taste of Peru in the Pearl

Let's hope you get a chance to try the novoandean cuisine in THIS state sometime soon! I've already praised Mixtura in these pages and believe it serves the best food on the eastside by far (give it a month or two, and the curious Kirkland crowd will have subsided, I'm sure). I attended their "grand opening" party last week so was able to meet the staff -- a great group with high aspirations and, as in Portland, eager to please. They still have a few kinks to work out, and after several visits, the menu can seem somewhat limited. There's also the issue of a very pedestrian wine list (despite my input), and the noise on a busy weekend can be too much for anyone over 30. But who's complaining?! By the way, the bread they bake and serve deserves mention, as it's made from the ancient Incan grain, Quinoa (keen-wah). You probably know more about this than I do, but it's quite unique in both texture and taste, and higher in protein than other grains. Just another element that makes Mixtura a very special place.

Somewhat related to this, rumor has it in Kirkland that an Australian investor is buying up restaurant space in hopes of creating a friendly European-style "grazing" atmosphere on Lake Street. I understand that the new Kahili Coffee is his, and there are more to come. He offered to buy Mixtura, too, but they obviously have their own plans and should fit in well if this indeed comes to pass. More reason to "cross the pond" in the future . . .

So sorry I haven't had a chance to respond to your emails as they've been most informative. Ken & I are closing on a new house, so things are a little frantic in our world.

Emmanuel talked about inviting us Span-Tabbers to the opening party, but??? I suppose I could have just crashed it, but see above, MOVING. I'm glad you got a good feel from the crew & next time I'll make sure to make reservations in advance. Valentine's weekend is always tough anyways, as things were booked pretty solid at the new Boat Street Cafe, 35th Street Bistro & La Medusa as well last Saturday night. Have you tried any of the above? I really enjoyed my recent meal at Medusa in Columbia City which will be near our new neck of the woods. Perhaps we'll have a celebratory dinner at Mixtura when my dad comes out from NY to help us settle into our new abode in beautiful Skyway (love these neighborhood names.)

Two Mixtura questions: How's the weeknight scene? And are they still amenable with folks bringing their own wine since the list hasn't improved yet...corkage?

I don't know what to think about the Australian thing. What is a European-style "grazing" atmosphere--something like tapas hopping where you go from bar to bar & have a drink & a bite? Sorry for feeling skeptical, but when one person is trying to buy up several block's worth of business it spells homogeneity to me. Look at Luigi DeNunzio's "Little Italy" in Pioneer Square. I'm glad Mixtura held out. My god, they just opened! I'd like to know more about this land grab in the SoCal of the eastside...

Great news about Boat Street Cafe reopening! Where is it? I used to be a regular there and then lost track, although she promised to inform everyone on her e-mail list when she found a spot. Medusa is on my list, but I don't know 35th Street Bistro, so I'm all ears.

You definitely could have "crashed" the Mixtura party with no problem. It wasn't real well organized, and although not crowded after 7:30, they didn't have enough food to go around. Still, it was a nice gesture. Weeknights there are manageable, particularly if you go a little later in the evening -- eastsiders are typically back home by 8:30. The corkage fee is $15, but you could tell them it's your birthday or try to talk them into waiving it when you make the reservation: "if you want me to eat there before or after peak hours . . ." As frustrating as it is to be offered a bad wine list, I'm still sympathetic with restaurants trying to make a buck, so I usually just accept the corkage. Is there an etiquette here I should know about?

Tapas hopping -- thank you, that's the term I was looking for. I'll try to find out more about this Australian invasion, as I also have mixed feelings. Outside of the surprise appearance of Mixtura in downtown Kirkland, however, there's certainly no other culinary draws, unless you have some mysterious attraction to Anthony's or Hector's (Lynn's Bistro is good). So maybe a little urban planning, even of the Australian variety, is in order. I could go on about this, but everyone knows how limited it is . . . except, it seems, the people who live here. If someone has the vision to transform Lake Street into an environment where places like Mixtura can flourish, that could be good. So far, it has not evolved in any positive way on its own for a variety of reasons. As I mentioned, Kahili Coffee appears to be the first installment for this investor, and it's OK -- nice, cozy atmosphere (not unlike Triple-J), free wi-fi, and a small wine bar at one end. In any event, it's hard to imagine the area getting much worse, despite some inherent charm, so homogeneity may not be a threat unless it also perpetuates the mediocrity. It just may turn out that Mixtura is the real agent of change for this part of Kirkland. At least it appears to be attracting some attention from the other side of the pond.

Enjoy your new home, but don't make your dad work too hard!

The new-improved Boat Street Cafe is located at 3131 Western Ave, same street as Span Tab, but in the NW Work Lofts Bldg, close to the Denny intersection on lower Queen Anne. I'd like to check it out, here's one reviewer's link: http://www.thestranger.com/seattle/Content?oid=25389

Quite a different atmosphere, but still close to the water! Now back to the boarding on the Olympics & packing... Thanks for the temporary distraction.

Thanks, Catherine. I look forward to returning to the Boat Street fold.

I love tapas - thanks for the review.

Most what I read online is trash and copy paste but your blog is different. Keep it like this and dont sell out! 330)